Most cocktail bartenders have the same pet hate: making Espresso Martinis. While they may seem like a simple enough drink, they’re actually a bit of a punish because of the need for a fresh shot of espresso using an actual espresso machine. They’re running a bar, they don’t have time for all that $h!t.

Unfortunately for them, the people have spoken. Espresso Martinis have risen to become hugely popular and bartenders have to make them whether they like it or not. And tbh, we’re massive fans here at Lyre’s.

Strong, sweet, rich, and like an after-dinner coffee, liqueur and dessert rolled into one, they’re actually a dream to mix up at home.

Ready to step into those bartenders’ shoes and become your friends’ in-house expert on all things Espresso Martini? Including how to make variations that have no alcohol? Brilliant, let’s do this.

Our esteemed patriarch Lord Lyre esq. was present at the Groucho Club in London in the ‘80s when the first ever Espresso Martini was created. As the story goes, a rather famous fashion model put her dart down long enough to challenge bartender Dick Bradsell, the godfather of modern cocktails, to mix her a drink that “Will wake me up then f*ck me up.”

His response was what’s known today as the Espresso Martini.

It’s a good story with a nice edge, though we think just the first of those two is more than adequate. It’s 2022, ff*s.

What goes in an Espresso Martini?

Let’s start with the 1983 original. Using vodka as his base ingredient, ol’ Dick B. added coffee liqueur, a teaspoon of sugar, and an espresso shot pulled hot from the coffee machine next to his station. He shook it hard with ice to work up a really solid amount of froth. Three coffee beans on top to finish. Boom.

Now not everyone likes to sweeten their coffee, so the sugar (or more commonly these days, vanilla syrup) is optional, in the same way a sugar in your long black is optional.

FYI: Technically, because it doesn’t have gin or vermouth, an Espresso Martini isn’t a martini at all, but it’s known for being served in classic V-shaped martini glasses so no one seems to mind. We do think a coupette glass works much better though.

These days, there are a ton of Espresso Martini variations. Probably the most popular involves switching out vodka for the rich, dark intensity of white rum. That’s our fave recipe which we like so much, we’ve included it below.

Does the Espresso Martini have caffeine in it?

Damn right it does - coffee’s the key ingredient. Because it has caffeine in it, an espresso martini will keep you awake at night if enjoyed in the evening - but then again, that could be the plan! It’s the perfect choice for a pick-me-up.

Dick Bradsell would be pleased to know Espresso Martinis are still being garnished with three coffee beans floating in a petal formation on the creamy surface. The beans come from the traditional Italian way of serving coffee liqueur, where they represent health, wealth and happiness. Three cheers to that!

What can I use instead of coffee liqueur in an espresso martini?

If you're craving an espresso martini, but you've run out of coffee liqueur, it's possible to use strong espresso coffee (preferably brewed in a coffee machine with plenty of foam) combined with 1-2 tbsps of brown sugar instead. We recommend avoiding instant coffee; it often doesn't provide the same depth and richness of flavour required for an espresso martini.

Does the Espresso Martini have dairy in it?

Nope, not at all. But they do need to have “crema” - the foamy froth from the top of a steaming shot of espresso. And it has to be hot espresso you pour into that shaker of ice. If you let the coffee cool, you’ll lose much of the crema. That’ll make it v. hard to create the froth you need on top of your cocktail, no matter how hard you shake.

If brewing up a hot espresso from a machine or even a stovetop moka pot isn’t an option at your place, never fear: premium cold drip coffee makes an excellent substitute, and it’s becoming more findable at major supermarkets.

How do you make a non-alcoholic Espresso Martini?

The Espresso Martini is a tight, well-balanced drink where every ingredient counts. Be prepared to keep that shaker moving longer than for most drinks.

Set yourself up at home and pick up one of our Espresso Martini sets, which include bottles of both Lyre’s Coffee Originale and Lyre's White Cane Spirit - a combo that’s versatile enough for loads of other cocktails too.

*For a lower alcohol (rather than zero alcohol) option, replace the 15ml of White Cane Spirit with 15ml of white rum or vodka. 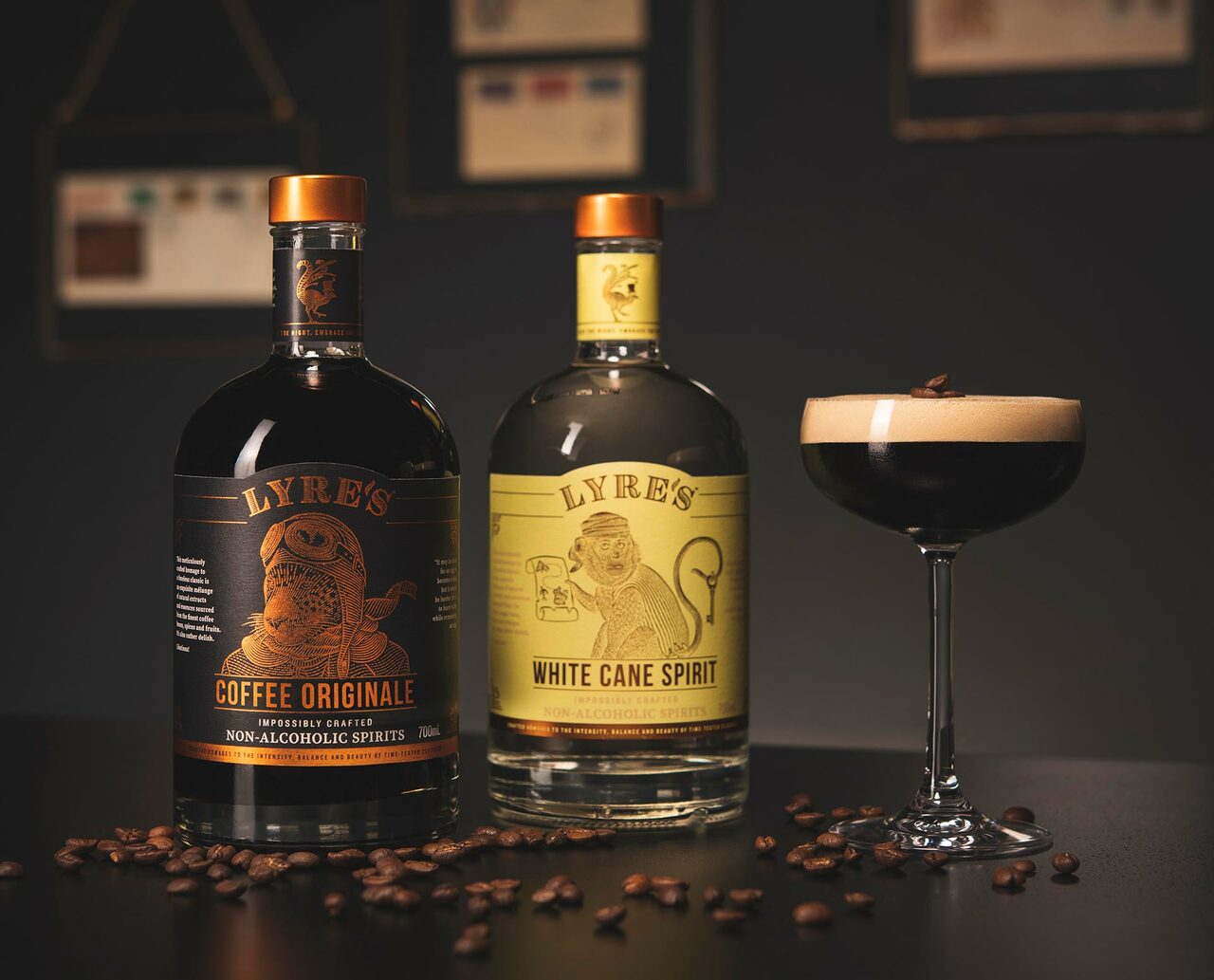 What makes an Espresso Martini frothy?

Whipping up that foamy top is the most satisfying part of an Espresso Martini. To get it, you need to use freshly brewed espresso still with its crema, then keep shakin’ everything together ‘til you can’t shake no mo’ (or for at least 20 seconds) - and you need to shake HARD. The ice needs enough time to both near-freeze all the liquids and break itself up. Shaking hard is your gateway to getting the oils in the coffee to properly combine with the air bubbles, all at the right temperature.

Now since the froth is made from the liquids being shaken and made cold, guess what happens as it warms up again? The froth goes away. So think ahead and put your martini glasses in the freezer first to help the froth last. And don’t let what you mix sit around in the shaker either - pour that sucker right away.

Tip: Pouring drinks for two? Fill each glass halfway, then top them off. Most of the foam will only come out of the shaker at the end. If you full-pour one drink and then the other, all the foam will end up in just the first glass.

Where to buy an Espresso Martini

So your mouth is watering at the prospect already, right? We get it, and you’re not the only one. To find the nearest bar or restaurant that can mix you up an Espresso Martini using Lyre’s Coffee Originale, click here.

Will you make any excuse to have a coffee? And are you already onboard with Espresso Martinis? Then you’ll love exploring these same-same but different drinks you can mix up at home using Lyre’s Coffee Originale.

Coffee and tonic. Who knew...? Well, it’s a thing and it’s downright delicious. If you’ve a hankering for an afternoon pick-me-up, this one’s got you covered. Think Espresso Martini highball, but lighter and fresher. The Lyre’s Coffee Highball is a game changer! 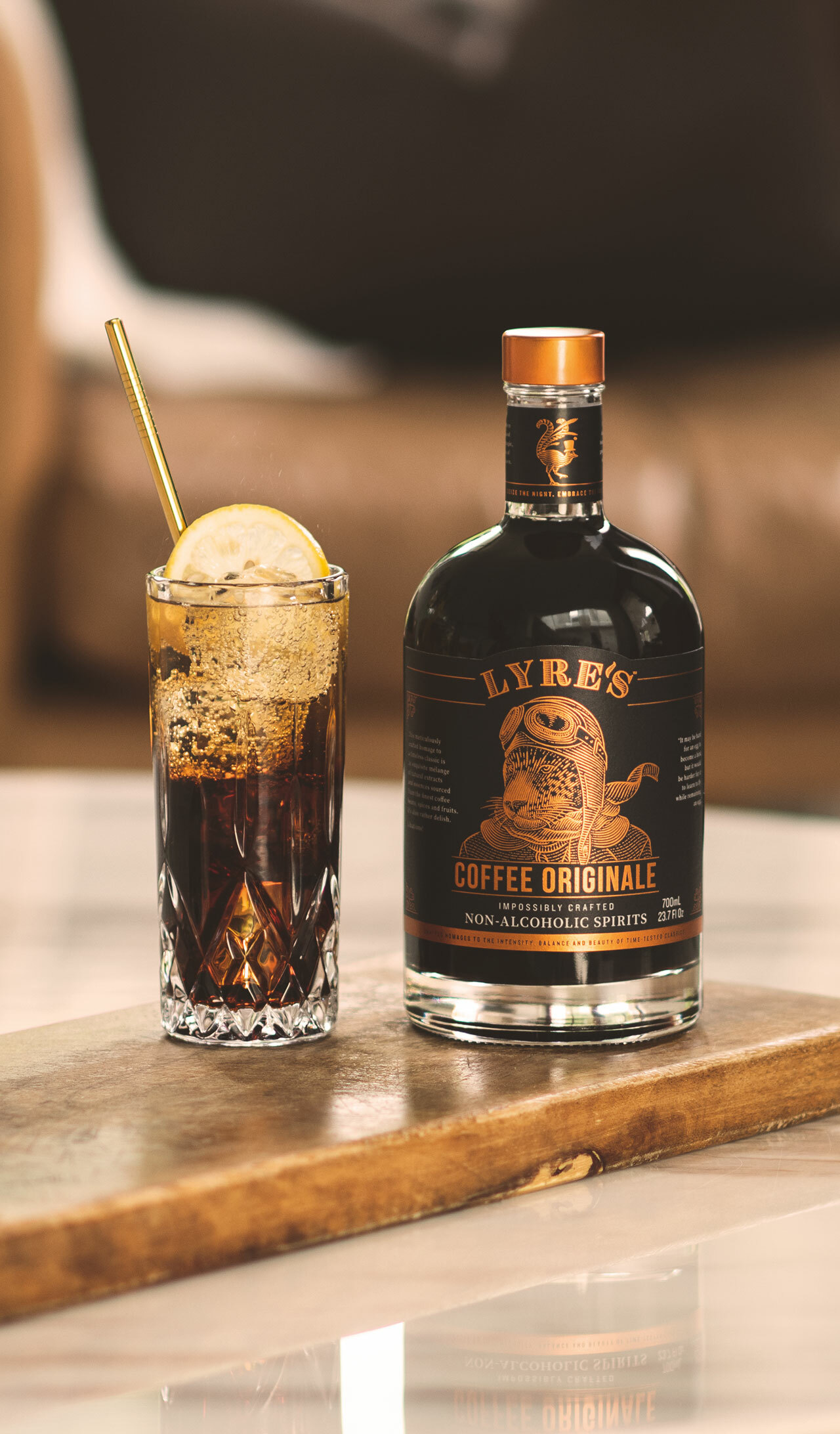 A life at sea hardens the senses. Your vision is wavier, noises are swishier, and every meal is underscored by the subtle sapidity of sea salt. As far as we’re concerned, we’re all the better for it, because nothing says sophistication like a decadent caffeinated martini with a left-field salty kick. Ahoy!

There are few things in life that compare to an indulgent meal overlooking the rolling hills of Tuscany. But a decadent dessert cocktail like this one has the ability to elevate the most special of dining occasions.